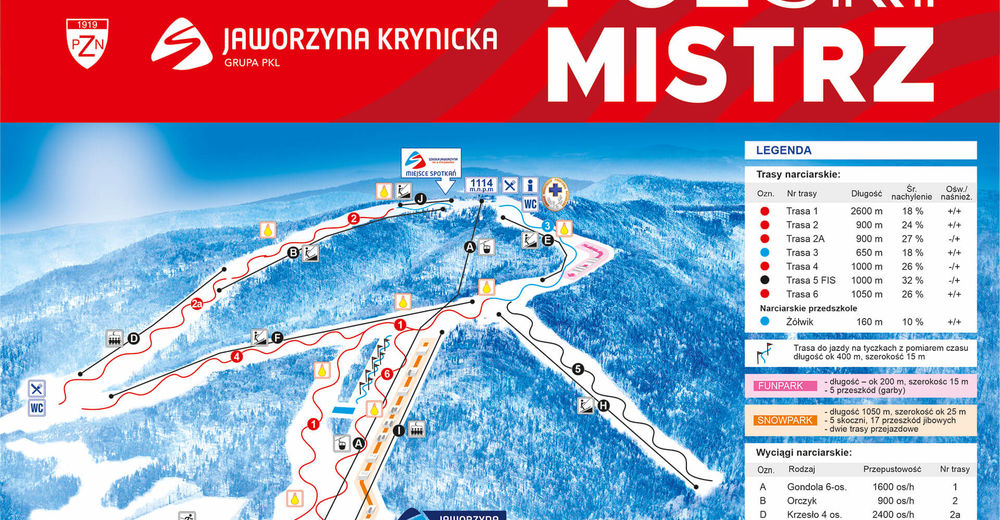 At Jaworzyna Krynicka there are excellent conditions for winter sports: downhill skiing, cross-country skiing and snowboarding.

The snow cover stays here for at least 4 and often even 5 months a year. On the slopes of Jaworzyna Krynicka there are 7 ski slopes with a total length of over 8.3 km, of which four have FIS approvals. Plans are to plan further ski slopes.

In the winter season skiers can use eight gondola lifts, two 4-chair lifts and eight T-bar lifts. Ski runs have varying degrees of difficulty. Well prepared and maintained ski runs and ski slopes, GOPR care guarantees safety, comfort and pleasure from skiing. The more so because all the pistes are artificially snowed.
The jewel in Jaworzyna is the "Fisowska one" the longest illuminated ski track in Poland with a length of over 2.6 km. The route is divided into two parts - the upper one, from which the third route is separated, excellent for beginners and the lower one - classified as a typical giant route. The next route is the FIS V track, where advanced skiers will find a lot of space for winter fun. Ski runs II and IIa are very popular among skiers and snowboarders. The routes are classified as family and marked in red. Due to the appropriate location they are sunny throughout the day and their width and optimal slope makes us feel like in the heart of the Alps.
Route II is equipped with an additional lift on the other side of the slope. On the route IIa a 4-seater chairlift with a length of 1000 meters has been made available for skiers and snowboarders. A training lift for children called "Mały Wacek" was created in the Izwór clearing next to the chairlift. Route IV is also equipped with two T-bar lifts. The route is intended for beginners and intermediate enthusiasts of white powder. The "Żółwik" training lift, which is located in the upper part of route II, is available for children and low-skiing skiers.
For part of route No. 6 (1000m) is the longest and largest snow park in Poland. It consists of jib elements (17 elements) of varying difficulty and elements of the hill type (7 elements). The snowpark is 1100 m long and about 25 m wide, it is perfectly visible from the gondola carriages and a 4-seater chairlift is dedicated to its operation. The Snowpark in Jaworzyna Krynicka is under the care of experts in this industry, namely Park Pirates and Techramps, which guarantees perfect route preparation, its attractiveness and, above all, safety. There are two lines in the snowpark. One is for people who want to try adventure in a snowboard park and for the youngest skiers, while the other line is for more advanced skiers and snowboarders.
The newest ski trail in Jaworzyna is 1050 m long and is equipped with a modern 4-seater chairlift, which can transport 2400 people per hour. The route is illuminated and has artificial snow.

In the winter season 2014/2015 the ticketing system was completely changed which became more flexible and adapted to the requirements of customers and market standards. A skipass machine is also available at the bottom station, where you can buy a ski pass or tourist ticket. All these amenities will certainly translate into smaller queues at the ticket offices and greater availability of the Jaworzyna Krynicka ski station offer. The season at Jaworzyna Krynicka lasts from November to April.