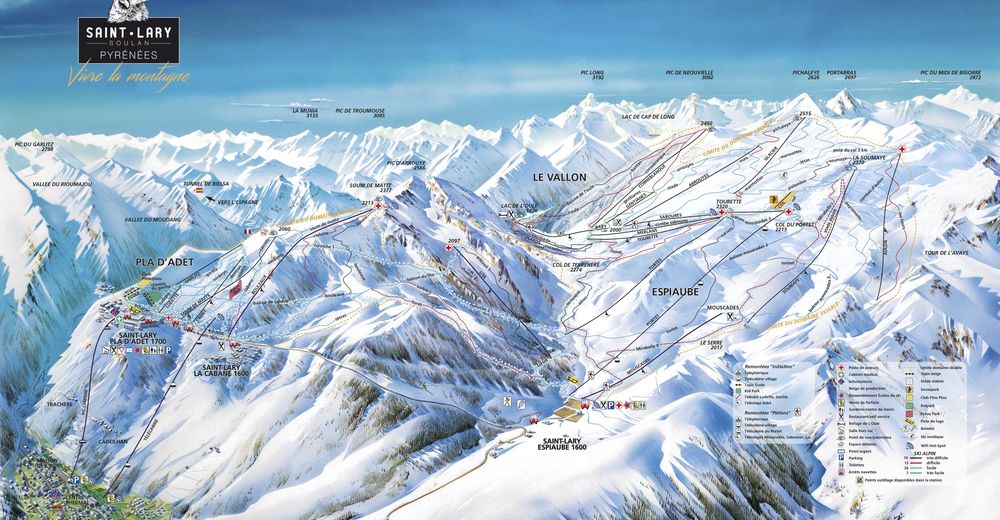 A unique pleasure to share with the entire family!

With the new chairlift Bouleaux, a new redesigned area is at your availability: a new space totally designed for learning to slide with a new start for this part of the ski area.

In the heart of the Hautes-Pyrénées, in the Aure Valley, Saint-Lary is a family winter sport resort of international fame. It offers one of the greatest skiing domains of the French Pyrenees spread over three inter-connected sectors, at different altitudes and exposures, for everyone's enjoyment. Choosing Saint-Lary means you will fall under the typical and preserved charm of a Pyrenean village, located at 800 m of altitude, chosen to receive the Famille Plus label.

Saint-Lary gathers the best aspects of life in the mountains and Pyrenean scenery, a happy alliance between water, sun and the warm welcome of its inhabitants.

Saint Lary is one of the most beautiful ski resorts in the Pyrenees, wit over 100 km of slopes and thirty ski lifts, where snow cover is guaranteed by more than 270 new snow machines.

Saint Lary is divided in Three different zones
Saint-Lary 1700, is also known as the Pla d'Adet. This is the historical part of Saint-Lary, where ski lifts depart from the village, in front of most of the medium altitude accommodations. This area has recently been refurbished and redesigned with beginners, families and children particularly in mind.

St Lary 1900 "Espiaube" is an intermediate area that begins at 1,650 m above sea level at the car park in Espiaube. This is a transitional sector, with blue and red pistes running through it from the upper parts of the resort, and also a sports zone with some excellent red and black runs in the forest on a north facing slope. Saint Lary 1900 has some very long runs of more than 3 km, such as Mirabelle and Terranère, which are among the most popular in the whole resort. Mirabelle is served by two chairlifts and a cable car and has a mountain restaurant which is also accessible to non-skiers.

Moving upwards and crossing the ridge, Saint-Lary 2400, or the "Vallon du Portet" is a true jewel of the skiing world. At an altitude above 2000m, it offers a wide range of pistes, an extraordinary 360° view of the Pyrenees and lots of sunshine. Here we are at the border of the National Park and near Lake Oules.