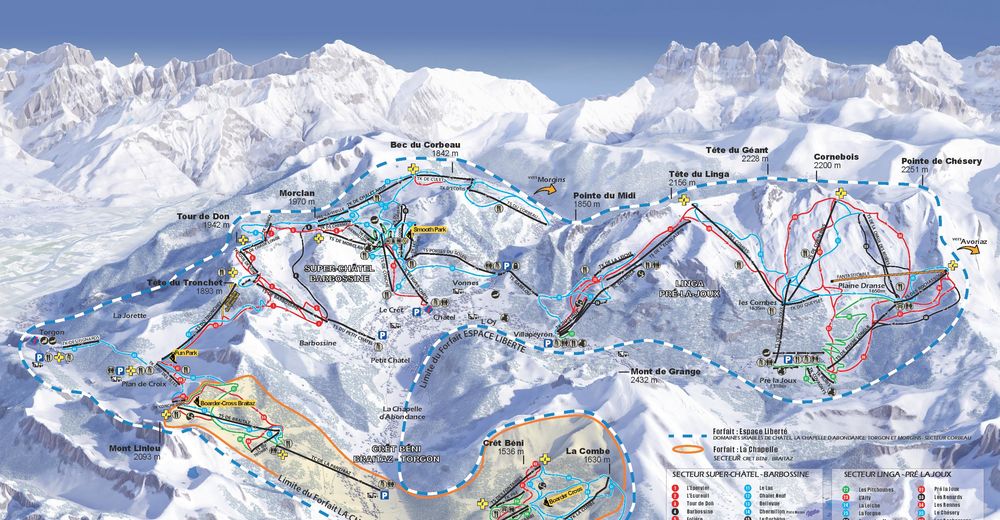 High in the mountain of Haute-Savoie, the village of La Chapelle d'Abondance offers a warm welcome to all.
Located in Northern French Alps, but only 90 minutes from Geneva airport, the village lies at the heart of a traditional farming valley in Haute-Savoie. Nestling below the lofty peaks of the "Cornettes de Bise" and the "Mont de Grange" which rise to almost 8,000 feet, the Abondance Valley is a swathe of verdant mountain pasture amongst the Alpine Peaks of the Chablais Massif. The swift waters of the River Dranse run trough the valley, enriching the fertile pasture land before flowing out into Lac Leman (Lake Geneva) near Evian.
Winter and summer, the delights of the "Valley d'Abondance" will spoil all mountain lovers..
Winter, shrouds the mountains in snow, and La Chapelle becomes a gateway to the vast Portes du Soleil ski area with some 650 km of marked pistes, 35 km of cross-country ski trails and 85 kms of snowshoes trails. With many original dishes to savour, do make sure you try some of the fabulous savoyard specialities and cheese, which carry the distinct flavour of the local soil.
Perhaps the most important gift visitors can find in these ancient mountains is the opportunity to take a break, and unwind from the hectic pace of life - Try it !!!!

The "La Chapelle/Torgon" pass provides access to all the lifts and pistes in the 3 local ski areas - the Cret-Beni and Braitaz ski areas in La Chapelle d'Abondance, and the pass is also valid for use throughout the Torgon ski area in Switzerland. The pass covers the shuttle bus service link between the village, Cret-Beni and Panthiaz/Braitaz, and gives access to 75 kms of prepared pistes and 22 lifts and tows, which is probably plenty for most beginners.

1/ Crêt-Béni ski area
In the heart of La Chapelle d'Abondance, is a firm favourite with families and offers a great choice of tree lined pistes on the flanks of Mont de Grange. You will find a 6 seat express chairlift ready to speed you on your way, whilst our brand new snow cannon system helps ensure we can offer plenty of skiing even mother nature has held back. Beginners will find a choice of wide and gentle, green and blue pistes, some of which descend from the very top of the lift system right to the edge of the village. Meanwhile the red runs are steep enough to provide experienced skiers some real challenges.
Whilst the snow park will be a firm favourite with Boarders with a range of natural bumps and artificial rails, pipes and other features to test your skills.

2/ Braitaz ski area
Is perched high up on the opposite side of the valley. The village shuttle bus links to the Panthiaz car park where a telecabin awaits to speed you to tree lined slopes on the flanks of Mont Linleu. This area also links with the Torgon ski area in Switzerland, which is also covered by the "La Chapelle/Torgon" pass.

Pass Evasion ski
230 km of slopes between France and Switzerland
In France covers Cret-Beni and Braitaz in La Chapelle d'Abondance and Super-Châtel and Barbossine sectors in Châtel.
In Switzerland covers Torgon, Morgins and Champoussin (as far as "La Pointe de l'Au").